Thought I would share a few of my siblings sleepy poses. We have some in common, and some that are different. 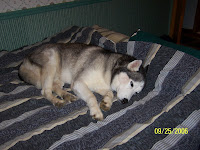 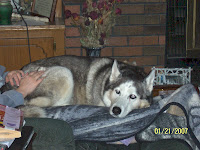 On the left, the spare bed. He's basically decided it's his. (he will share with Monty sometimes)
On the right, mom's lap. That's because he is a BIG SCARDY BABY! Or, mama's boy. Actually, I think it's both.
This is his Air-It-Out pose. He does this a lot. But definitely not as well as I do. 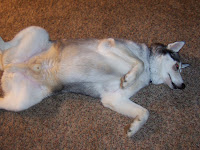 His all time favorite spot is my couch (0k, I do share with him) on the pillow. He hates it when someone is in his spot on the pillow. 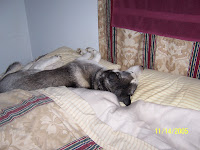 Then of course, is his spot on the humans bed. See where he is in this picture on the right? This was HIS spot for 7 years, until dad came along. There were some "issues" at first when dad took Sam's spot on the bed. (Sam thought it was his, and wanted dad to move) Eventually they worked it out. But, once in a while, Sam decides to re-take his old spot and hog the pillow next to mom's. (or, put his head slightly ON mom's pillow) 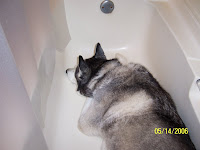 Then, there is the bathtub. He goes and sleeps there whenever there is a storm, or it rains. Mom especially loves it when he gets in with his muddy feet and then she has to scrub out the tub BEFORE she can get in and take a shower. Not to mention the fact that Sam is not too thrilled to get out just so SHE can get in!

And, just to keep you all happy, here is a shot of me. Just because. 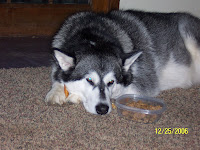 Hollybollyboo
(need to make sure my fans get their Holly fix)
Woo'd by Khady Lynn at 9:29 PM

Oh my that bathtub shot is hilarious!! haha

Ive been working on the "Hail Stormy", its fast becoming my favorite, you should try it :-)

I can't believe Sam would even THINK about getting into the bathtub on his own, even if there wasn't water in it. You can never be too sure you're not getting tricked into a bath.

PS. Thanks for the picture of you. You know what your fans want. :-)

you are such a sweetheart Holly, I think I am in love with you!

Ohh.. Holly.. I sleep in the bathtub sometimes too when there are storms. I also sleep in it alot when it is summer here!
Hugs, Sitka

We blogging dogs should have a sleep-a-thon.:-) For every hour we sleep we could raise money for a good cause.
Thanks for sharing the photos of all your housemates sleeping habits. I am going to try some of them tonight.