Well, the good news is that he doesn't have anything terrible like mange. The bad news is, it's just hypersensitivity due to his allergies. He is no longer eating anything that is on his food allergy list, which means it has to be environmental. We'll keep giving him the zinc supplements too. Anydog know of any good herbal remidies for hypersensative skin allergies? We need a good supplement to help with this. Mom even bought some biotin supplements since it is suppose to help with skin and hair.

Mom did buy some new laundry soap this week that is hypoallergenic (Arm & Hammer has one) and started to wash all the doggie blankets, and blankets that cover the couches, and bedding to see if that might help a little too. They also have to start giving him baths in a special shampoo (Keratolux). He's gonna love that!

I'll keep you all updated as we go along with this. I sure wish it was a more specific diagnosis. Poor guy.

I know I've talked about my moose stuffie before. I really love it, even though someone ate one of his ears off.

Here is a recent video that shows me carrying around my moose.

I had to see what Abby had, just in case I wanted it. However, I realized Abby didn't have anything I wanted, so went to lay down. (Notice droopy boy laying on my other couch just looking dorky.) But, then I realized I had forgotten something, so went and picked up my moose stuffie for my nap. 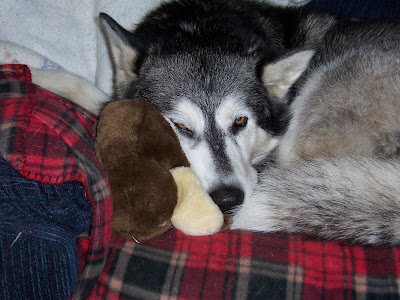 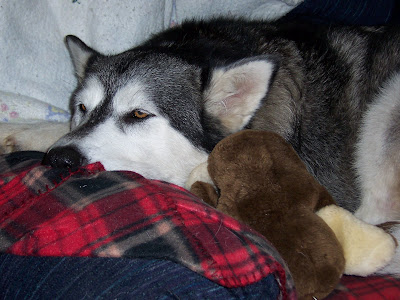 I sure hope everydog and human had a good Easter and got lots of goodies in their baskets! We got rabbit jerky treats and lamb ears. They were all very yummy!

Have a wonderful week!

Princess Holly the Beautiful
(do you like my new name?)

Kona went to the vet yesterday. They did some skin scrapings, and didn't find any mites. Then they took some skin biopsies, so hopefully that will show something. It could be anything from extreme zinc deficiency to an autoimmune disorder. The biopsy should give us some information.

The results won't be back for about a week. So, as soon as I hear anything, I will let you know. Mom and dad are REALLY hoping for an answer. There is no way any human, even the usual stoopid ones, can look at that poor dog and NOT think there is something wrong!

I promise to have new pics of me this weekend. Mom finally got the Kodak software working, so I promise new pics!!

This time the humiliation doesn't belong to Samuel. It's poor Kona. 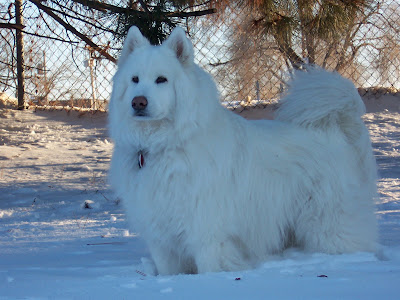 However, this is how he looks now. 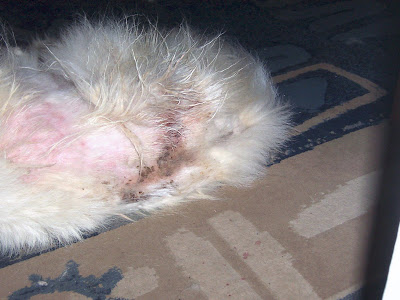 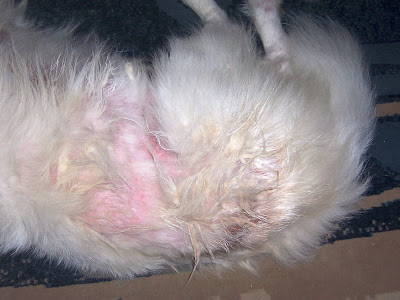 Unfortunately, he has had some allergy problems. We had him tested for food/environmental allergies, and have changed his diet, and even started giving him some raw food instead of canned. He has been on benadryl, chlorpheniramine, and steroid injections, and nothing seems to be working. He chews on himself until he is bleeding. He even horka'd up a hairball the size of a baseball. We even had skin scrapings done to test for mites. Mom keeps trying to cut the hair around the areas he chews on, and putting hot spot medicine on it, but he just won't stop. We recently thought that maybe he is a little OCD (Obsessive Compulsive Disorder), so put him on Xanax. It is helping a little, but the most help has come from a little invention mom thought up. Hence, the humiliation for poor Kona. 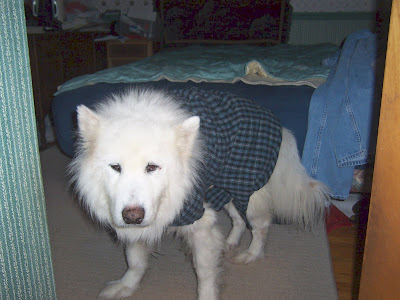 This is the only way to keep him from chewing on himself. Mom made this little outfit out of a pair of her jammie pants. Pretty nice of her to give up her favorite lounge wear for him.

He is going to the vet Wednesday morning. He will probably need to get some skin biopsies to see if there are other problems that we can't figure out. Even the vet can't figure out why he is having so many problems. So, wish him luck! I will keep you updated.

Yes, I have been very lazy over the past week. Mom does have some new pictures, but she is having a bit of a problem with her Kodak Easy Share software not doing what she wants it to do since it was upgraded. I think I'll have dad look at it.

In the mean time, here is an old one of me so you don't forget how pretty I am. (as IF) 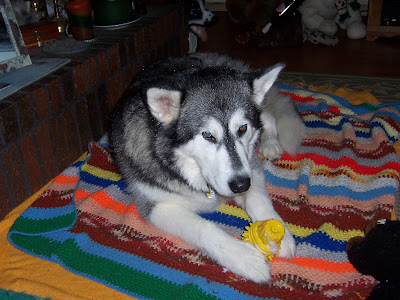 I promise to get this thing figured out so you can see some new pictures of me.

PeeS: I would like to say good-bye to my good friend Marvin, and his mom Jeannie. With very sad hearts, they have decided to leave the blogging world, and I will miss them terribly. Best wishes Marvin and Jeannie, please stop in from time to time. I will miss your wonderful poems and handsome face! I wish you both all the best, and hope you can return one day.
Woo'd by Khady Lynn at 9:24 PM 12 comments:

Did You Miss Me?

The stupid human woman is so busy these days, that she hasn't let me on the puter long enough to blog. Something about being busy at work and staying late, then coming home and trying to catch up on all her SMS e-mail. Whatever.

So, I thought I would post a funny picture of Droopy (pre-droop). More proof that he is just plain WEIRD! 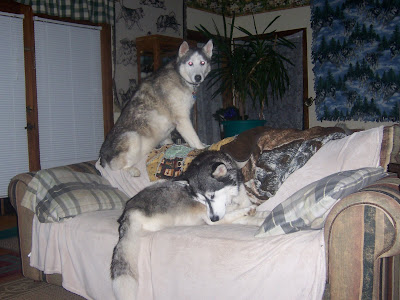 Apparently, he thinks he's part khat now, and can sit on the back of the couch. Freak.

Hollybollyboo
(back to my nap now)