I'm not sure who would be more jealous of Monty's hair; Don King or Albert Einstein. 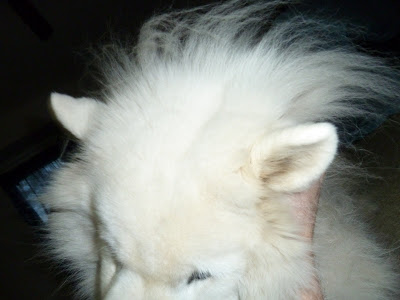 Have a great weekend everyone!

Lovely Lena and her squeaky chicken. 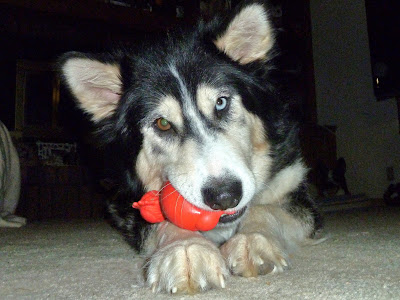 To say this has been a bad year for losses of so many of our furry loved ones and friends, would be an understatement. Now, another sad loss. Our dear friend, and mom's very first foster dog, Kelsey has gone to the bridge quite unexpectedly. 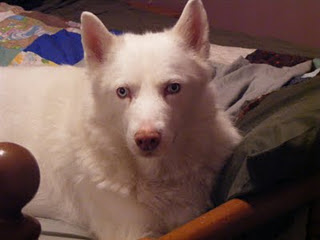 Mom rescued Kelsey in February 2002 from near death at a shelter in St. Joseph Missouri. He was only about a year old at that time. She fostered him for 8 months until she found the perfect home for him. 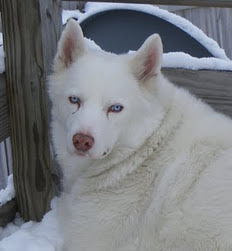 Not only did Kelsey get a fabulous home, but our mom got a great new friend in Kelsey's new mom and their family.

Kelsey survived eating parts of a purse that got lodged in his stomach and intestines back in March 2007. He had to go through three surgeries in two days. The vet didn't give him very good chances of survival, but his mom never gave up on him and he pulled through! 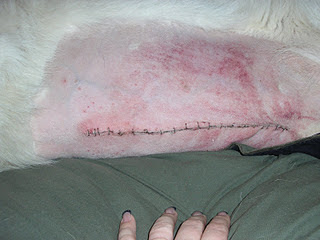 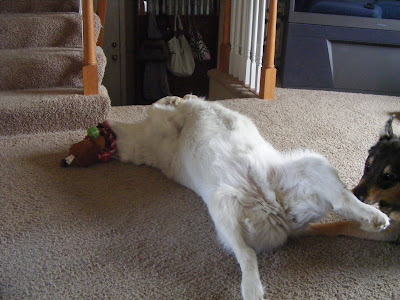 He was a tough boy and was back to his playful self. Here he is doing the upside-down froggie doggie!

But, that wasn't the last of Kelsey's amazing survival stories. In August 2009 Kelsey was diagnosed with a nerve sheath tumor at the base of his spine, by his tail. Mom and Kelsey's mom drove him to Colorado State University's Veterinary Hospital where the amazing doctors there were able to completely remove his tumor. Unfortunately, his fluffy tail had to go, too. But that was ok, we just all referred to him as the little polar bear! 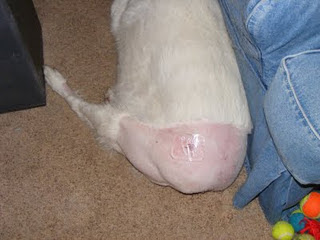 He was such a loving boy! Always happy to be with his family, especially when he was getting his tummy scritches! 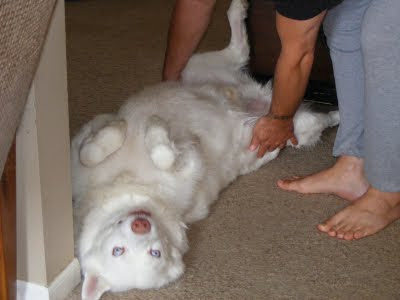 However, a couple weeks ago he started to become very weak and had problems getting up and down and his mom thought he might just be having some arthritis problems. She tried Rimadyl but it didn't work, and he was getting worse. So, on Saturday she took him to the vet to see what was going on. The diagnosis was a fast moving, degenerative neuropathy. His spinal cord was no longer able to send the signals to his legs and so they were no longer able to work correctly, or carry his weight. Knowing things were only going to continue to get worse, his mom and dad made that ever so difficult decision to let him go. 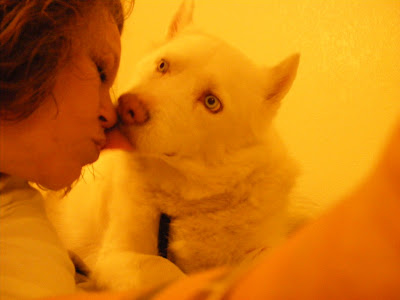 Run fast and painless now my dear friend. You were such a trooper and tough boy to have lived through all the health obstacles that were thrown your way. Your mom and dad did so much for you and loved you so completely. There will definitely be a huge hole in their lives and hearts at your loss. May you wear your Silver Harness with great pride.

With many tears and sad woo's,
Hollybollyboo and the rest of the crew. And, most especially our mom, too.
Woo'd by Khady Lynn at 12:51 AM 13 comments:

Don't ask me how this happened. I don't generally share my couch with anypup except my baby Khady. And, since I'm not too fond of our newest interloper Lena, this is an especially rare moment. 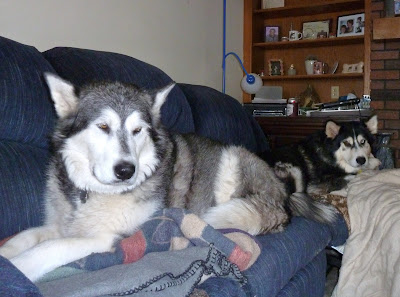 You're not likely to ever see it again either. 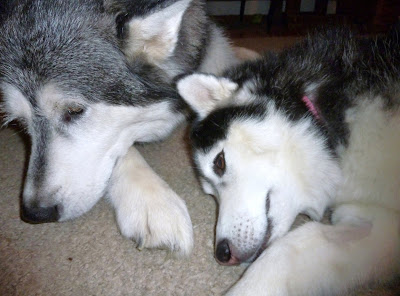 Hollybollyboo and my baby Khady too.
Woo'd by Khady Lynn at 12:03 AM 10 comments: 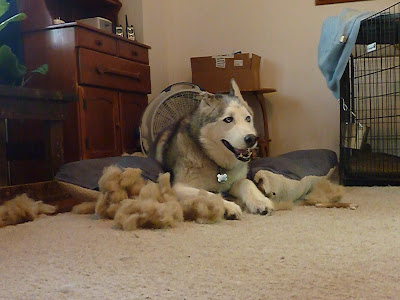 Although, Samuel has decided that this decimated doggie pillow is quite comfy to lay on since it is in front of the fan, the guilty party who decimated it is actually this pupster...... 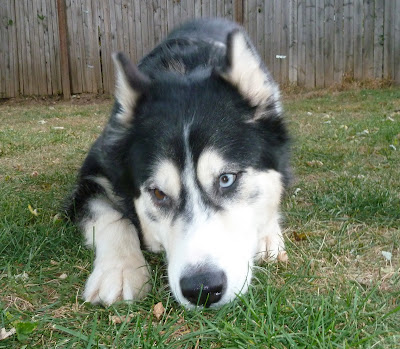 Yep, Lena is the guilty pup! Actually, this is the third one she has destroyed. Even Samuel is impressed!

Hollybollyboo
(who thanks you all for your well wishes on her very painful tooth pulling, and still has not gotten any good treats!)
Woo'd by Khady Lynn at 12:24 AM 9 comments:

Well, lets just say I had a little "accident" (not telling how) and broke off my bottom canine tooth. You can see it here. Notice the big gap to the right of my top canine tooth? Right below it is my broken tooth. 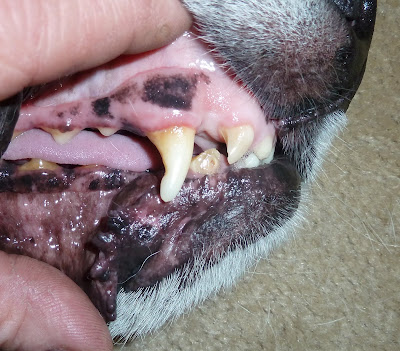 So, I went to "TheVet" on Wednesday and had it pulled. They sent it home with dad when he picked me up. When mom saw it, she couldn't believe how huge the root was. This was all BELOW my gum line! 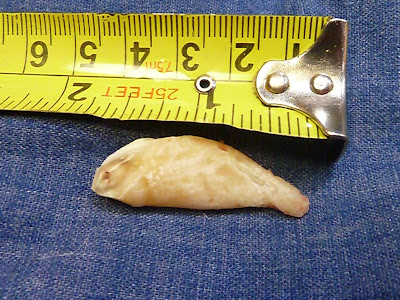 Anyone else think my tooth looks like a fish?

Well, except for Samuel, who

I've heard mom threaten him with debarking. But, after 13 1/2 years, for some reason, I don't think he believes her.

Oh well. At least Lena and I had fun!

Hey every buddy! Khady Lynn here. Who ever said that Siberian Huskies and Malamutes were NOT good watch dogs, hasn't met us! 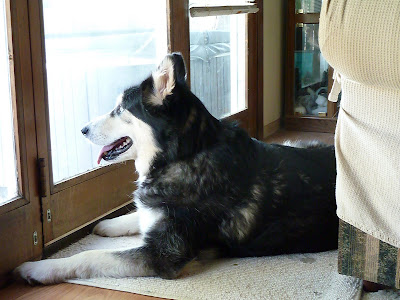 This is my new friend Lena, our foster dog for Taysia Blue Siberian Husky Rescue. Looks to me like she is sure "watching" rather intently! 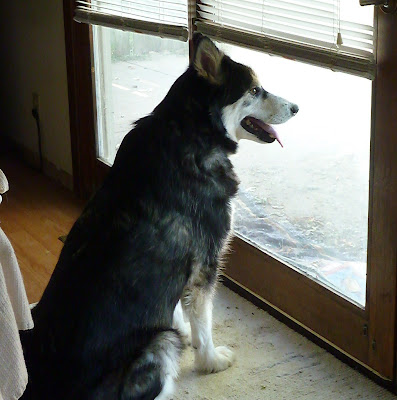 Can any of you guess what she is watching for? I'll give you a big clue. It lives in trees, and is evil, and often the reason us pups get in trouble for things we didn't actually do! 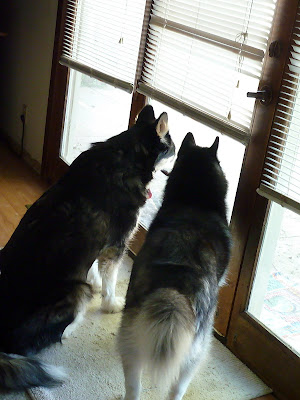 Don't worry Lena, I've got your six! As soon as we see one of those evil critters try to enter our yard, or scamper across our fence, I'll be right there to help you get it!

Hello Monday. I'm here to take a bite out of you!! 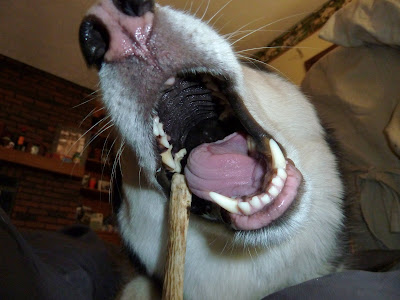 I've been having fun since I got home playing with my new foster sister Lena. She's a really good sport about learning what it's like to play "Husky style!" 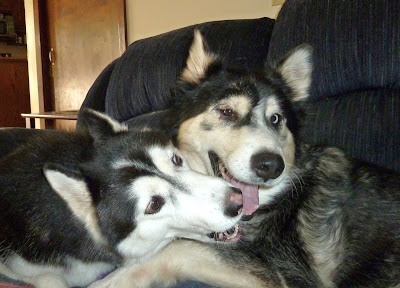 She's really learned a lot about how it works. You know, the whole bitey face and chewing on each other thing. 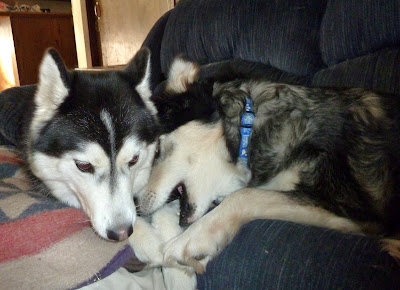 Hey!! That's not a chicken leg you got there in your mouth! 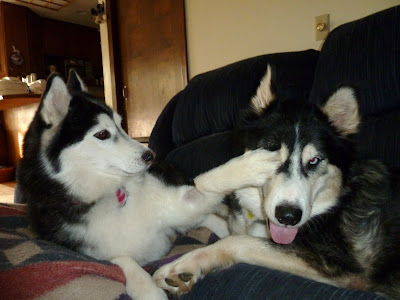 I have to be sure she doesn't get too out of hand though. Or, should I say, too out of paw!!! 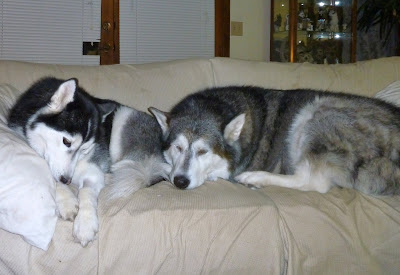 Hollybollyboo and her baby Khady too
Woo'd by Khady Lynn at 12:03 AM 6 comments:

So, I'm celebrating by picking on Lena!

Luckily, she's a really good sport about it!