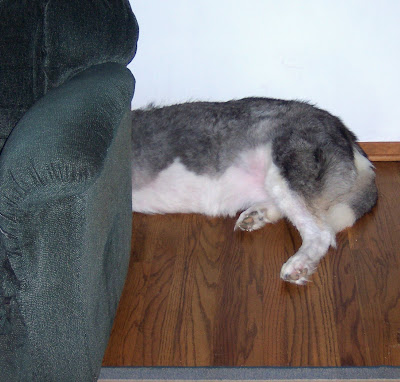 Name the owner of that adorable, rubable, soft, and beautiful tummy. 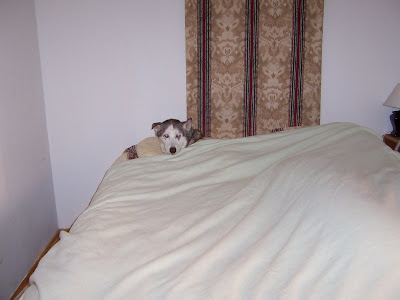 Name the dork in the bed. 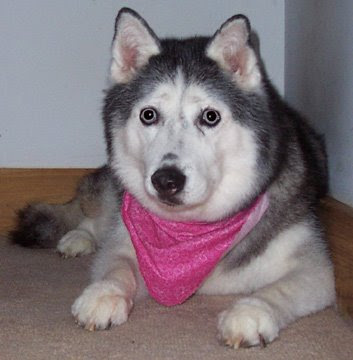 My very good friend Tubey lost one of his pack mates. Niki was 15, and lived her final 2 years with Tubey's family.
After Niki's human passed away, she went to live with Tubey's family. Tubey's mom took very good care of her, and gave her lots of love in her final years.
Sweet Niki 6, may you fun free at last, with no more pain. May you wear your Silver Harness with great pride. And, may you be happy once again with your dad, Don. Even though you didn't like your picture to be taken, I think you were quite beautiful.
Holly
(very sad, once again)
Woo'd by Khady Lynn at 12:24 AM 11 comments:

Finally!! The stupid human woman got me my crown. It's about time! After all, I am a Princess, so I should have a crown and jewels to go with it. 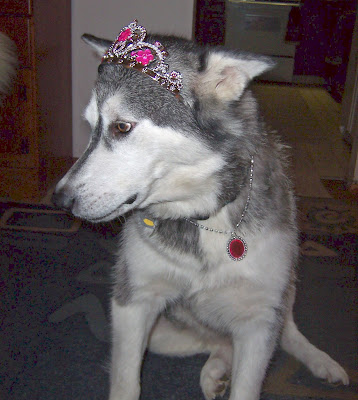 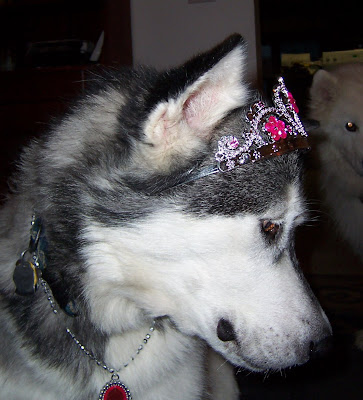 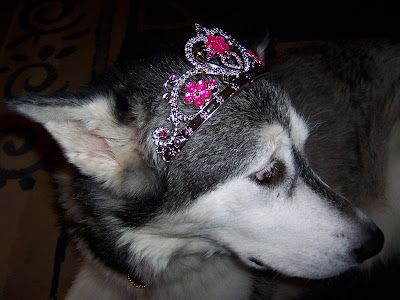 I'm doing very good at my SZK School of Siberian Studies photo shots, don't you think? I totally refused to look at mom! After all, a Princess does not look a peasant in the eye!

All this "posing" for the camera has really put me in a mood. I was finally getting a bit irritated at mom for trying to get me to sit this long without treats, so I finally bailed and went to my favorite place. Can you guess where that might be? 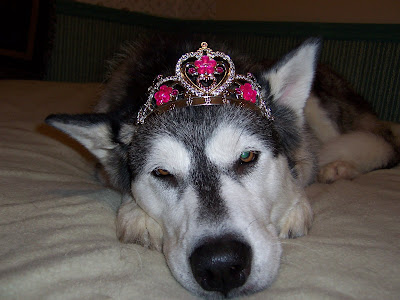 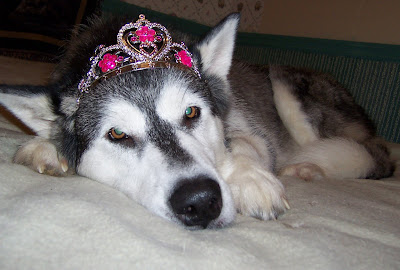 Hey mom! Will you just stop, and go make me my dinner please? A Princess needs her sustenance and some beauty sleep, ya know!?!?!

And, speaking of princesses, (figuratively speaking, of course) my very good friend Khyra, has awarded me with the Daily Blogger Award! Thank you so much Khyra!!!!

It is an award given to those that blog at least three times per week. I know I have been slacking.....er.....busy lately, and not able to blog as often as I like, but I promise to kick mom off the puter, (those SMS people talk too much) and get back to blogging more often!

The cool thing is, that Khyra got her award from my good friend, and fellow Princess, Eva! I love Eva, and I really miss her sister Tasha. But, we are all helping Eva move on, and hopefully, she will have a new sister soon to keep her company.

I am going to pass this award along to my friend Ari, the Canine Naturalist. She is sooo khool and very pretty with her blue eyes!! She has some of the best, and most beautiful adventures! I would love to visit her and see all the beautiful places she gets to visit!

Well, my adoring fans, and subjects, I am off to bed. It's been a long, hard day of Princessing. Seriously.

Well, for the second time this week, we have had a tornado warning. The first tornado warning was Sunday morning about 2:30 a.m. and it went right over our house!!! We were very lucky! Our fence was flattened along the back, and we have lots of tree damage. The neighborhood less than a mile from us actually had a touch down, and houses were severely damaged. Luckily, no one was injured, because it came out of nowhere and with no warning.

Then, tonight, another stupid tornado warning!! While dad got us to the basement, mom was stuck at work. She works on the 26th floor in her building. Here is a picture she took out of the west window before the tornado siren went off. 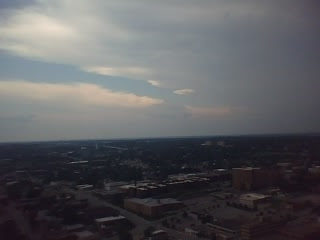 It didn't look too bad to her at this point. When the tornado siren finally went off, she decided to stay in her office, cuz she is lazy and didn't want to go down 30 flights of stairs to the basement. The building security shuts down the elevators and locks down the building as soon as a tornado warning is given. And, even though this tornado was a long way from downtown, they do not let people leave. So, mom was stuck at work, and wasn't even able to leave, even though the tornado was way west of her.

But, then the sky changed and looked like this; 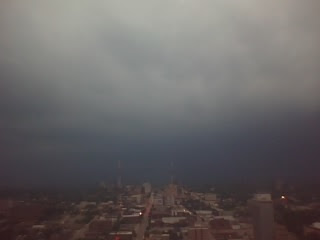 Finally, she decided to go to the basement. She was stuck there from about 7:20 p.m. until almost 8:30 p.m.!!! When they finally let everyone leave, she almost drown her car trying to get home. The rain was sooo heavy and fell so quickly, that the interstate she takes home was underwater in one area. There was lots of street flooding all over town. But, she did finally make it home at almost 9!!

Dad finally brought us all up from the basement when mom got home, and we were very happy to see her. We were sure to sniff her to make sure she was ok.

The sad thing is, that there was a touchdown north of Omaha in Little Sioux Iowa, where a Boy Scout troupe was camping. There were some deaths, and several injuries. Please keep all those poor people, and their families in your prayers. The Midwest sucks. I hate Nebraska!

I can't wait for fall to get here, cuz this weather is stupid, and dangerous, and I'm already sick of it.

Who turned on the stoopid heat around here! It was 92 degrees outside, and really humid! I spent most of the time in the basement on the nice cold tile floor.

Here's how Abby spent her day. 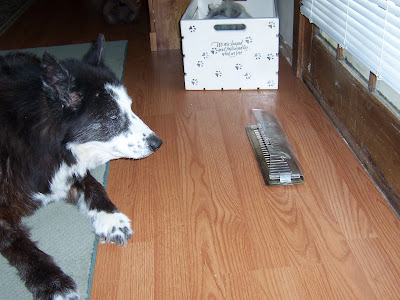 Hollybollybananabeautifulboo
(chillin' in my own way)
Woo'd by Khady Lynn at 10:07 PM 20 comments:

Why must I endure this torture? 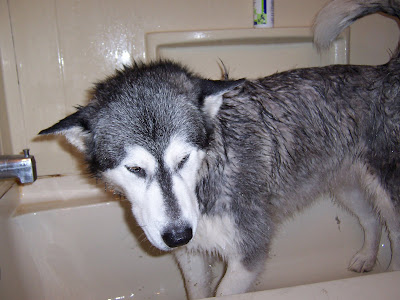 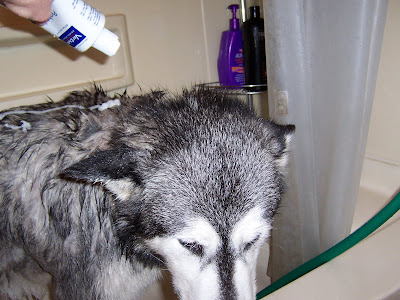 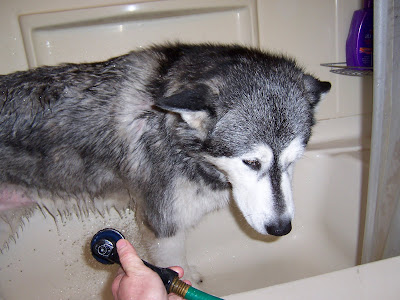 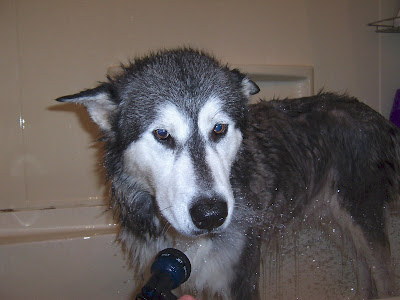 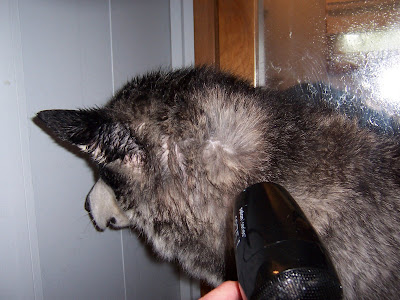 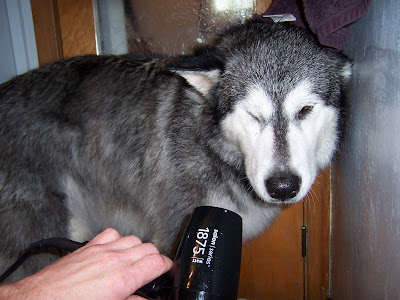 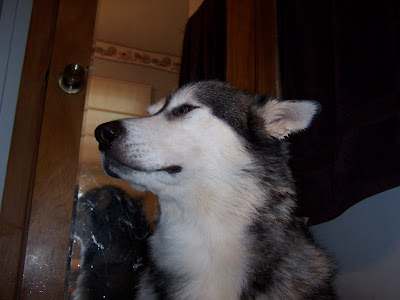 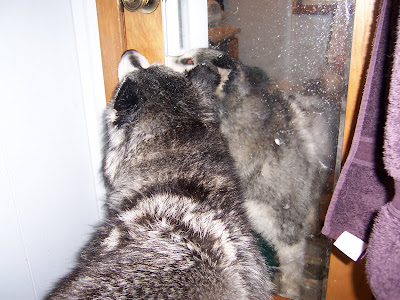 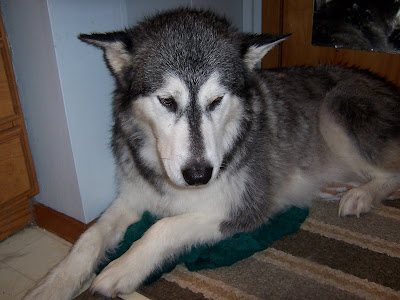 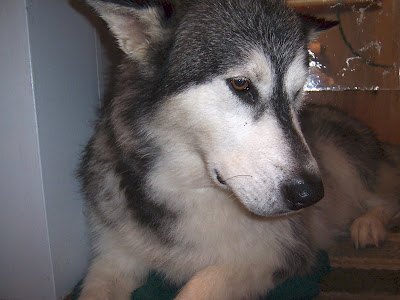 Just to be beautiful?
Hollybollybananabeautifulboo
(not happy about the bath abuse)
Woo'd by Khady Lynn at 12:43 AM 27 comments: